We all know  my girls say the craziest things, especially me 5 year old. Here are 3 from the last 24 hours.Enjoy!
Me(on the phone with my hubby): “I don’t know, I think maybe I have PMS.”
Bella (my 5 yo)”No, you don’t!”
Me:”What? What are you talking about? How do you know for sure its not PMS?”
I am obviously fishing for what the hell exactly she thinks PMS is.
Bella:” Well, you’re not coughing and sneezing and all that.SO, its not PMS!”
Me: LMAO!!!! Obviously she thinks PMS is code for a cold. I guess that’s what we get for spelling everything in front of her!

A little earlier today we were out shopping. Mommy needs some new shorts because last years are too big (Yey!) of course, as stated in the previous example, it was the worst possible week of the month to try on clothes. Anyways, I’ve been in a bit of a funk and thought what the hell I need some retail therapy! As I am trying on shorts, 2 sizes smaller than last summers, I am leery if they are going to fit. Eureka, they fit but it depended on the style as to how they fit. I’m trying them on and a little flustered by my water retention. When I hear Bella say, from the corner of the dressing room, “Good luck with that!”
Me: “Good luck with what?” Bella: “Good luck getting those suckers to button!”
OMG,she’s like my conscience walking around taunting me. I laughed so hard, there was no way I was getting those suckers buttoned. You just can’t suck it in when you’re belly laughing.

After the shopping, we hit lunch. My girls love Sonic, I can’t, in good conscience, eat it. It’s so fattening. But what they really love more than the food itself is the act of eating in the car, the taboo of being released from their car seats and eating freely. So, we compromised and I took them to Wendy’s for a cheeseburger and some milk and we ate in the parking lot. Oh, if you only knew how badly I hate that. It’s one of those odd pet peeves of mine. It just conjures images in my mind of someone so insatiably hungry and obese that they can’t wait til they get home to eat. it just screams weakness.( I know, mole hill into a mountain ).They, on the other hand, were as happy as clams. As we sat there eating, them eating their Wendy’s and me my Subway, every thing was perfect. It was a beautiful spring day. We finish and as we are leaving the parking lot, we spy a gentleman in the  drive thru on his bicycle. You know Bella, she was not letting this one go unnoticed.
Bella: “Hey MOm!”
Me: “Yes, Bella?”
Bella: “That guy sure looks special!”
I’m not exactly what she was inferring but the intonation in her voice wreaked of sarcasm. I was pretty afraid to ask. But she said exactly what I was thinking! I’ve realized she doesn’t say crazy  random things, she pretty much just says every single thought I ever have. She is hilarious. Much more hilarious than if I had said it. 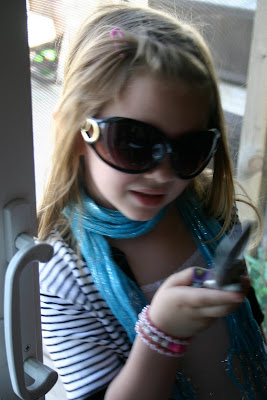 Bella is hilarious. What a treat to hear your thoughts coming out of a 5 year old!

Stopping by from Friday Follow!! I'm your newest follower!! Love your blog and can't wait to read more!!!

OmG you totally have made me laugh out loud, thanks for stopping by, I am following you back, and will soon be returning! Yeah for the bellas!!

Too funny! Out of the mouth of babes. Bella sounds like quite the character! Reminds me of my youngest back then. I so miss the days when my kids were that age.

Thanks for the follows, I am following you back.

Jacki
What's a Mom to Do?
https://whatdoesamomdo.blogspot.com/

Diary of a Fat Chick
https://blog4fatchicks.blogspot.com/

Your Bella is beautiful! Following you back.

Your Bella is beautiful! Following you back.

LMAO WITH THE PMS COMMENT!! My daughter would say the same thing. We always spell around her. 🙂 She's adorable!!

I love the shorts comment!!! How could you not have laughed….kids are too funny and honest!!!
Happy Friday!

Thanks for stopping by and following me :o) Following you back!!

Thanks for stopping by! Love that Bella, she is too cute..
kim

Thanks for the humor! I've enjoyed exploring your blog.

Following from Friday Follow. Please stop by when you can and check out my Etsy artist giveaways.

LMAO that is so hilarious she is such and observant little girl. you gotta watch out for her she will tell you how it is.

Too funny with the PMS comment!! Already following, but just stopping by to say hi for the Friday Follow! Enjoy your weekend!

I feel the same way about car-eaters… grosses me out! It seems like you have a lot of fun with your girls!

OMG! She is hysterical..and absolutely gorgeous to boot!

OMG! She is hysterical..and absolutely gorgeous to boot!

Reply
Guess what today is?? It’s round 2 @plandisneypa
Remember this! Write it down and commit it to memo
Congratulations to the Cruz boys and men and all t
This one hit me in the soul. Life is definitely fi
Summer is officially over and I’m already missin
I’d rather be here! Can’t wait to celebrate #
Happy Fall, y’all! My favorite season is here an
This has been a motto I’ve been embracing a lot

How to Help Your Child when...

How You Can Help a Child...