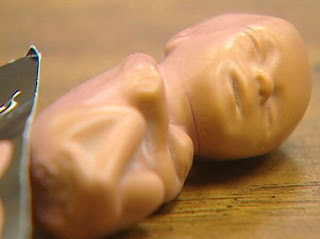 The Fetus Doll handed Out in a Norfolk, VA Elementary school

A fetus doll was being handed out to elementary school aged children as an anti-abortion tactic by a teacher in Norfolk,Virginia.

From the Virginian-Pilot, May 21:

The dolls, which were distributed over weeks or months, are not authorized by the division as instructional materials, spokeswoman Elizabeth Thiel Mather said Thursday. Mather said the employee will remain on leave until school officials investigate the reports….
Principal Sheila Tillett Holas was put on leave today…. The division began its investigation after The Pilot asked school leaders this week about the fetus dolls.
The distribution of the life-like forms among grade school children shocked and repelled some parents and teachers and School Board members who discussed them in a closed meeting this week.

Seriously? How can this be allowed? In what way is this acceptable to distribute in an elementary school? This is ridiculous. Students in that age group should not be learning sex ed, little lone about the concept of pregnancy, birth and abortion! I can NOT believe parents didn’t see their kids with this and handle this situation sooner.Weeks? Months? WTH!!! I am flabbergasted. I would have freaked the EFF out if my elementary child came home with this “doll”. Either someone , who has no business doing so, is telling my children about sex and babies or they have effectively given them an inappropriate toy to bring home and left me with the aftermath explanation to a child who is too young to handle the complexity of the concepts involved. CNN, again you have opened my eyes to the atrocities in this world!

A fetus doll is not an acceptable learning too for an elementary school aged child. Would you allow this to take place in your school? What are your thoughts on the fetus doll?

Virginia and the Fetus Doll

I completely agree! This is absurd and completely inappropriate for these children.

Reply
The TRUTH About Motherhood – Virginia Ultrasound Law~ The Government Mandated Rape of America’s Women 2012/02/28 - 9:26 am

[…] I just read the article about Virginia’s proposed ultrasound law. We’ve all known that Virginia was anti-abortion. The Virginia Ultrasound law mandates that a woman seeking an abortion be given a transvaginal […]

[…] unneeded hysterectomies are being performed as an insurance scheme, but women are under attack. Our reproductive rights are being stripped away, piece by piece and our human worth has been compared to animals. We are in a day and time in […]