the things my girls say

You kiss your Mother with that mouth?

God knows I have two of the most precious, beautiful little princesses to ever walk the face of the earth but some of the things that come out of their mouths…well, not so princess like. For instance, this morning, this is what I heard at my breakfast table..
Gabs: “Me faaaarted!” (apparently, she was having a little issue with flatulence) .
Bella: “Gabs!!!! You don’t just fart and say  ‘Me Farted” . You say, “Excuse me. I farted, OK?” ( almost like, do you have a problem with that.) Mind you I am sitting at the table absolutely losing it, I am literally in tears.. It continues on…
Gabs:”NO, me say- Me FAAAAARTED!” (Uncontrollable maniacal laughing ensues.)
Bella (completely unamused) “What are you going to do when you are in school? (She’s so mature just because she is starting Kindergarten next year. What a big girl!) “Gabs, you have to say EXCUSE ME!”
Gabs: “Why?”
Bella:”Because its rude!!” (She has almost exhausted her very last nerve. I seem to be familiar with that feeling).
Gabs: “WHHHHHHY?” (All exasperated and fed up with Bella’s nagging!)
Bella: “Because it Stinks!!”(Huff Puff)
Gabs: “Me NO Stink!”(completely indignant).
Bella: “What? Are you just going to fart and run away??”
Gabs: (So completely over the conversation) “Yeah, me run away!” And she got up and left the table!
I was in awe of this conversation because Bella was being so mature and trying to explain manners to her 2 year old sister and because Gabs was completely loving driving her sister bananas. She knows to say excuse me, she just thinks its funny to irritate her sister by announcing the fact that she has broke wind. Oh , my princess, I’m so proud of her fearlessness. 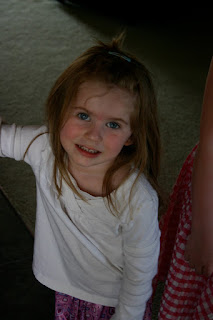 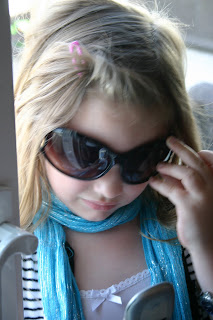 Bella: All business; no time for your shenanigans Gabs! I’m calling Daddy! You’re in trouble!

How do you know when you are letting yourself go? When your 2 year old tells you that you are ugly. That’s right folks, she told me that I was ugly. Worse than that, she wasn’t even mad at me. She meant it. I must look like shit. Damn ponytail! I’m blaming the ponytail.
Even worse than that, her 5 year old sister was all like “Gabs, say you’re sorry. You don’t mean that. You are going to hurt her feelings.Say you are sorry!”She was totally backpedaling for her little sister. She was trying to force her sister to give me a pity pretty. I won’t lie, I winced and then I cried a little bit. You know a la the pollution American Indian from the 70’s commercials. Oh yeah, I know, it was stupid but hey, I do have feelings.I wasn’t feeling particularly attractive today anyways,what with the bloating , the friggin “ponytail”, and the sweats and sweatshirt. I know its not rational to have a semi breakdown if a 2 year old tells you that you are ugly. I mean it wasn’t like my husband said I was ugly. It was practically a baby, which really made matters worse. I mean isn’t it pretty much unheard of and most certainly against the laws of nature for a child to think their Mommy is ugly? Seriously, I knew kids growing up who would knock you off your bike and kick your ass if you said their Mom was fat. I can’t even imagine what would have happened if you were so stupid bold to call them UGLY! But in my house, my own 2 year old told me I was ugly. When she saw that it upset me ( refer to pollution Indian), she promptly reminded me, “Papi’s ugly too!” gee thanks. Not only am I ugly, apparently, I have bad taste as well!It’s a miracle two such hideous people could make such beautiful model caliber babies. Lucky for them, imagine the alternative?