I read a post by my friend Jessica, referencing a post by GOMI and the dastardly state of mom bloggers. The story goes a little something like this, mommy blogger pauses to take and Instagram a photo from the ER where her toddler is being held down by his father so that said toddler’s head could be stitched up. I am usually inclined to agree with Jessica on many topics, GOMI not so much.

However, when I first read this, I agreed with Jessica and GOMI. I really did and then I took a moment and thought about it; really thought about it. We don’t live in the world we grew up in. We live in a digital world and everyone over shares. TMI and inappropriate shares are the norm. For Pete’s sake, the Pope has a Twitter account. Women live tweet their births. Nothing is sacred any more. It’s just the way it is.

I understand the whole argument that she should have been spending the time holding her son’s hand instead of taking and editing a photo. I can see that it looks, from the outside, like it’s all very calculated and callous and maybe it was. I just know that many bloggers have been guilty of exercising impropriety in inappropriate times. Is it for traffic? Or is it force of habit? Bad judgment? Or maybe it’s the only way they know how to document their lives? At first read, it felt like this mom blogger should have put down the phone and held her son’s hand.

Then I remembered that I am the same person who left the obstetrician’s office after being told that my baby had no heartbeat and in the midst of my heart breaking pain and through my own primal cries, I wrote it out. I felt like a trapped animal and I needed to purge myself of the pain, to make sense of it and I wrote it all down. I had 15 minutes before I needed to pick up my 4-year-old from preschool. I had to get my shit together. I needed to process the emotions. I needed to get a hold of my own breakdown. I know that to anyone who doesn’t blog, that probably seemed like an odd thing to do.

At the time I was blogging daily and I knew that this miscarriage was going to fuck me up mentally and it did. I knew I couldn’t skim over it or hide it from my regular readers or the people in my every day life. I hadn’t even told family yet but this wasn’t something that I could keep a secret from them for the rest of my life. I couldn’t write authentically and transparently while hiding a major life event. I couldn’t move through my real life keeping something like this from my friends and family. That night, I texted my family and told them what had happened but asked them to please not call me. I was too fragile to speak or even hear the sadness or pity in their voices.

The next morning before I left to the hospital for my D & E, I scheduled that note from my phone to go live. There was no thought or editing that went into it. It was a purge. I needed two things; to process and to purge. My world was collapsing around me and my first thought was to write it down and get it out.

What I didn’t do was share the last photo of my baby; the ultrasound taken at the request of my 4-year-old so that she had a photo of “her baby”. No, I never even considered sharing it because that is private. That is just for my family. That is one of my most precious possessions and it’s not for sell. Just as I am sure there are things that the mom blogger in question does not share. But everyone’s line in the sand is different.

Maybe for that blogger, she took the photo and Instagramed out of habit. Maybe she has become so accustomed to documenting every moment of her life via social media and her blog that it was the most natural thing to do. We are creatures of habit and there is comfort and reassurance in routine. In the moments of life when we are terrified, we go on autopilot.Would it have been okay had she written about it but not taken the photo? Would it have been fine if she tweeted about how scared she was instead of snapped a photo on her phone? Who decides? Why is one way acceptable and the other not? How are we supposed to blog like no one is reading when everyone is judging? I won’t judge this mom because no one knows why she did what she did and quite frankly, who are we to judge?

Do you think everything bloggers do is for traffic or is there a genuine compulsory desire to share their lives?

Project Mom Casting Call; The Truth the whole truth and Nothing but the TRUTH!

written by Deborah Cruz
I am Debi, I am a truthful Mommy. I am a 30 something Mommy, lucky enough to be married to my best friend and have 2 daughters whom I adore, most of the time. The last couple of years have been crazy for us with the economy. My husband has been downsized three times and we have moved twice and are about to move again. I’ve been single Mommying it during the weekdays and that’s a new experience, as well. Not exactly what I signed up for when I said I do. I used to have a life, friends, and work outside the home but when we had our daughter, I knew that I wanted to be home with her.  I am honest about the good and the bad, so other Mommies can come to realize that they are not alone in the difficulty assimilating into this role in life. None of the parenting books tell you the truth about mothering. They spin it all around and make it a fairy tale so when reality hits and we are in the trenches of real Mothering, we sometimes feel like absolute failures. I am here to let the world know that it is magical and on some days, it’s menial but it’s all worth it. 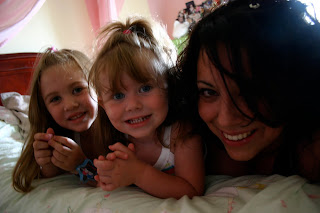 I have discovered firsthand through the rigorous initiation process of Motherhood that most Mommies are so afraid to fail that we lie about how great and easy it all is, which is helpful to absolutely no one. I’m here to stand up and say, it’s not! It’s hard, sometimes hellish work but the random “Me love you Mommy” s and little jelly covered arms choking you with love makes it tolerable and at moments, even sublime. Motherhood is hard and it’s boring at times. I AM your average Mommy~ working my ass off to give my girls the best possible childhood I can provide. It’s not easy and it involves a lot of regret and self doubt, almost continuously, but I’d never trade this experience for something different because to give up the chaos, I’d have to give up all the bliss; the little day-to-day miracles that I’d miss if I weren’t here to look for them. For example; the feeling you get when your eyes meet your breastfeeding babies in the middle of the night, or how a simple coo can erase an entire horrible day, the way your heart speeds up when you first see their heartbeat or hear their voice
I blog for many reasons. The most important reasons being; I love my family. I also have grown fond of my sanity and need an outlet for all of the frustration. It helps connect me to others at a time in my life, when it is easy not to be. My blog allows me a place to be Debi, not just Mommy.  My dream would be to parlay what I am passionate about (my family /writing) into a voice in the world. 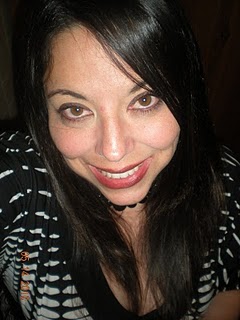 Project Mom Casting has an open casting call to mom bloggers. They’re looking to pitch a reality-based show about bloggers and the world of social media. If they like what I just said, I may be called for an interview.
If you’d like to give me some props, head over to the Project Mom Casting Facebook page and click “like” on my submission. Or, retweet this using @momcasting in your mention!