The Day I took Away Santa Claus

The Day I Took away Santa Claus~ This Christmas season has been craziness, wrapped in chaos, and tied up with a big bow of peppermint flavored stress over here these days. I know what you are thinking; its the holidays.It’s like this for everybody. Suck it, Truthful Mommy! Stress is a primary part of most Christmas traditions. And I do realize that along with being the “most wonderful” time of the year it is also fraught with balding stress ( for me anyways)What you’re not balding? Well, then obviously I am more stressed than you.I win!Score! I am no more pitiful than the rest of you or inundated with any more responsibility. But, this week is not a good week for this Mommy to have so much on her plate. This Mommy is trying to recoup emotionally and psychologically, not to mention physically, from the last month.Add to the mix a healthy  dose of exhaustion and cramps and there you have it; Mommy needs a rest preferably without the side of sass.

I find myself teetering between thinking my girls are the best thing since Ding Dongs were invented and quite possibly the spawn of Spongebob ( you know adorable to most but ever so annoying that you’d just like to bash your head into the wall?) Anyways, most of our days start off with good intentions then they wake up and dawdle ( like real life, slower than molasses dawdling. It requires a concerted effort on their part!) then they get dressed and eat even slower than that. Then trying to wrangle them into their hats, gloves, scarves, coats and boots must burn at least 500 calories.I’m exhausted before we even leave the house.

Santa Claus; You better Watch out

Then I drop of my 5 year old and she is adorable with her kiss kiss ” Love you Mommy” and wave.My ears perk up a bit.Then my 3 year old is absolutely freaking cuteness for the next 3 hours,usually singing songs, randomly bestowing hugs and saying “Me love you Mommy”.Then its pick up time.Then hell breaks lose. Trying to wrangle tired, hungry kids back into the car is worse than trying to get the out the door. Then there is whining, loads and loads of whining.We discuss our plan of attack for the afternoon, then somehow between the ride home and lunch, they turn into someone else’s children. Someone whose children I’d like to be able to send home!

Today, sometime in that time is when it happened. Seems the Santa threats and now even the kneecap busting elves are of no consequence. Instead, these two, seemingly innocuous to the naked eye, girls are taunting me, ignoring me and defying me at every turn.Pick up your room! NO!Finish your lunch!Nah!Stop hitting your sister!Complete silence, in observation of what an apparently stupid asshole I am for thinking they are going to listen to anything I say!Today, I told them, ” If you don’t behave for the rest of the day, Santa won’t be coming to Grandma’s house!”( They hire a Santa to come visit the girls at their annual holiday party) My  5 year old went on about disobeying me and my 3 year old looked me in the face and said( all exasperated like) : “Me know! Me heard you!No Santa!” And that was the moment that I realized that I had lost all credibility with my girls.My threats have become idle.They called my bluff.So, even though I didn’t necessarily want to…I canceled Santa. I took Santa away from my girls.*(Hangs her head in shame)*. I don’t think they believe I will follow through but little do they know, in the heat of the moment I texted the Big Guy and there will be NO Santa at the party. They will know I am serious on Saturday when there is NO Santa HoHoHoIng.Of course,that is assuming they make it to the party. They may be sitting home learning a lesson! We will see what tomorrow brings!

Santa; Where for art thou Santa Claus?

What threats have you made that you had to follow through with even though you may not have wanted to? How do you handle it when your kids completely ignore your requests to cooperate and behave? Would you go as far as to take away Santa Claus?

Elf on A Shelf run Amuck 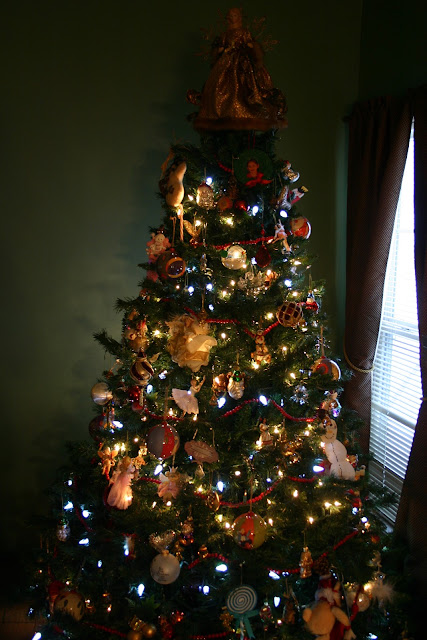 Elf on a Shelf Run Amuck~ Last year, we  I decided that I wanted to start the whole Elf on the Shelf tradition with my girls.Of course, once I saw what the Elf on the Shelf actually looked like, there was no way I was bringing that thing into my house.It would have scared the Christmas spirit right out of my girls. Thoughts of them sleeping with me nightly until they were 15 danced in my head and I nixed the Elf ( jokes on me because they are currently co-sleepers!) I wasn’t ready to abandon the entire idea, just that particular elf. You know me, I went on a quest until a could locate 2 more aesthetically pleasing elves. I acknowledge that I am so conforming to society’s idea of beauty. Shame on me.The girls were 2 and 4 and, let’s be honest, I needed a new bargaining chip.The fat guy threats just weren’t cutting it anymore. I needed something more tangible, not a threat of 1 day of the entire year. My girls are fairly certain that Santa is like God in the respect that he forgives..everything. But elves, well, those little bastards can be as vicious as Mommy wants them to be. Those little dudes are Santa’s henchmen; they bust kneecaps and bite ankles. And so began the tradition..in our home.

Anyone who knows the Big Guy and I know that, in most respects, we don’t half-ass anything when it comes to our girls, with the exception of when we are dropping the ball completely. Sky’s the limit, to infinity and beyond and all that bullshit. So, our elves ( yes, there are 2, one for each girl…its hard work wrangling babies) are sent via Air mail from the North Pole. You doubt me? Hey, there is postage paid and everything..even teeny tiny holes in the box so those minuscule Northern mafioso enforcers can breathe. Our elf on a shelf #1 and elf on a shelf #2 arrive with a letter from Santa explaining all ( yes, by now you should all be fully aware that we take everything just one step too far). 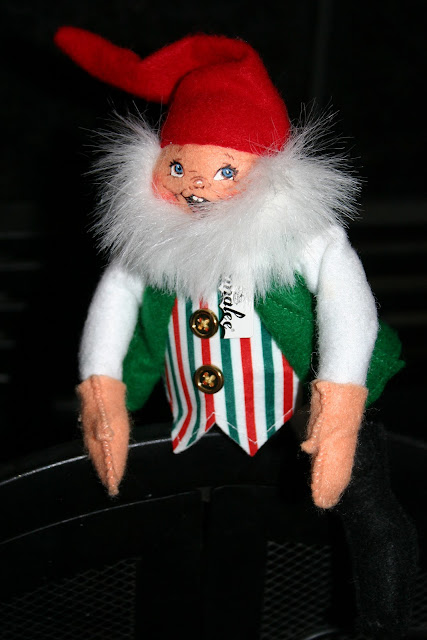 Elf on A Shelf #1 has arrived

This year, Analee ( that’s the name since “someone’ forgot to remove the tag from the elf) arrived magically,a s if out of thin air.One day he was not here and the next, there he sat high in the Christmas tree, watching,waiting to be discovered.Keeping watch over my girls as they shouted and fought.And then it happened, Gabs made her way to touch her Clara ornament(you know the special one that she is forbidden to touch) and as her eyes rose from the ornament there perched 3/4s of the way up the tree, Analee.Gab’s let out a yelp. Then said nothing. She slyly made her way to her sister, who screamed and immediately ran to greet our old friend.She was all flushed and hyperventilating trying to get the words out of her mouth, the proclamation that “Analee” was back. Santa had sent him to watch over them. I feigned surprise and said hello. Then it was bedtime. A few days later, after many hours of Bella standing in front of the Christmas tree explaining away every transgression that she had levied against her sister (literally, I found her no less than 15 times talking to the elf on a shelf…explaining that Gabs made her do it and to tell Santa..it was Gabs, I tell you.All Gabs!) a package arrived in the mail. 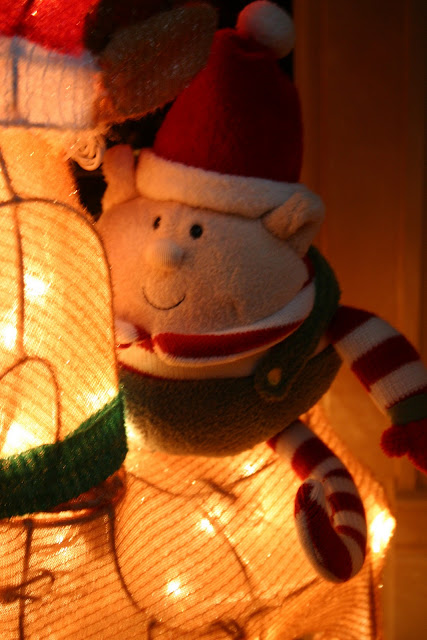 Elf on a Shelf #2 reporting for Recon duty 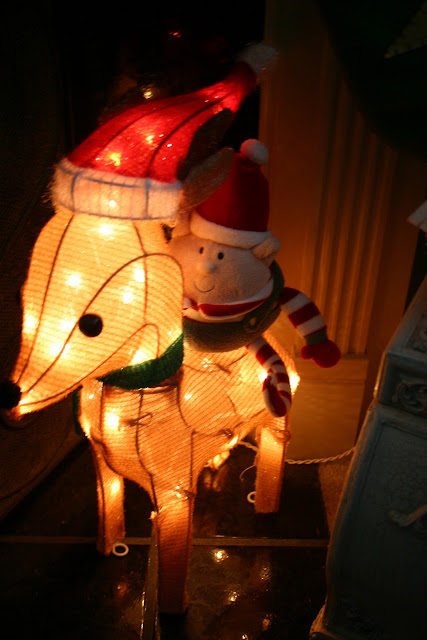 The girls saw the brightly decorated box and knew instantly what the package contained. They gently placed it on the floor, in front of the fireplace ( there is a great amount of reverence given to the elves) and peeled the packaging back. Inside, they found a letter from Santa and the jolly smile of “Ed”, sent back by Santa to report for another year of duty in our household. The girls gasped. They love the elves but they are afraid to touch them, not even with a ten foot pole. Well, Bella is anyways.Gabs actually midget tossed poor Ed out of her room on his ear today when she was having a particularly hard time fighting a nap.Poor Ed!But that’s an entirely different post. I was asked to place Ed somewhere, because, silly you, elves don’t run around in front of humans during day light hours.Bella has a theory that she shared with me the other day.It goes a little something like this: Bella” Mommy, how do the elves tell Santa what we’re doing?” Me:”Well, Bella, the elves are magical so they just pop back over to Santa and give him a daily report.” She looks slightly perturbed and confused.Bella:’Mommy, why don’t they just call him?” Me:”Well, Bella they can magically just pop back to Santa, why waste the minutes?”(I’m slightly exasperated.This lie has gotten too big,You know I can’t lie!)Bella: “Mommy?” Me;”Yes?”Bella: “Mommy,  I think Santa has secret cameras in the house and can see everything we do!”I’m speechless.After all, she is only 5 years old.First, she has rationalized the Tooth Fairy and now elves with spy cams? Me:”No,Bella.they.pop.back. to .Santa.every.night!”

Every night, I move the elves to different positions and to different random spots in throughout the house; the bathroom ( taking a poop, surprise Ed’swatching), eating breakfast (Surprise Analee is in the chair next to you),putting your clothes in the hamper (Be careful you’ll squish Ed), reaching for the milk ( oooh, poor Ed is chilly in the fridge..no sneaking candy!)turn on the fireplace (oh no,be careful Analee is getting hot under the collar).You get the point? And so starts another year of the mischievousness that is the elf visitors.Elf on a shelf my ass, those little suckers are running all over my house. It scares my girls that our little visitors wield so much power in their tiny hands.They are roaming free, recording every single scream, yell, hair pull, piss my sister off moment/ talk back to my Mommy, fighting my bedtime, not going to eat my asparagus moment that goes down in our house..and apparently, so are Santa’s spy cams!So, remember you better watch out, you better not pout,you better not cry, I’m telling you why..Santa’s sending his henchmen to rat on you!Happy Christmas and beware the elf on a shelf! 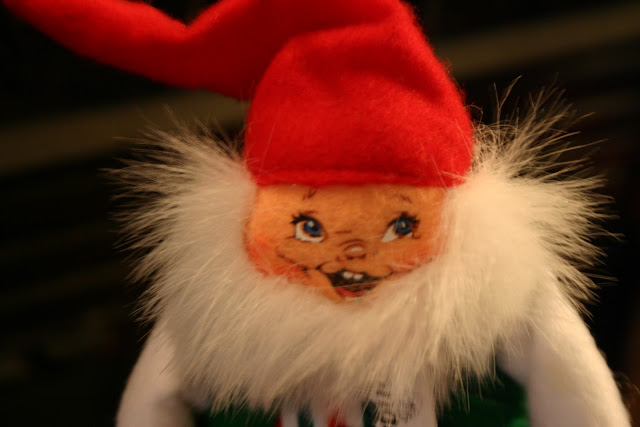 Elf on a shelf saves the Day