Perhaps they are not stars

“Perhaps they are not stars, but rather openings in heaven where the love of  our lost ones pours through and shines down upon us to let us know they are happy.” 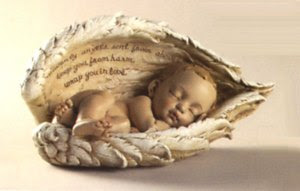 So, I always like to encourage people to count their blessings instead of their problems; You’ll be much happier and have a lot more free time! That being said, seems of late I’ve been a really bitchy a**hole about all things and everything, especially my girls. Maybe its been the lack of sleep, the week day single mothering thing, missing my husband, needing some nookie, stress…who knows what the answer may be. All I know is this is not who I am, but it seems its who I’ve become. Temporarily anyways. I’m working through it and feeling my feelings.  It’s come to my attention that I’ve been spending a lot of time on here complaining about my children. Boo on me for that.
The reason I am saying boo on me is because I recently, last night when I couldn’t sleep, was checking out some blogs on last weeks FF and I came across one that really touched my heart. The name of the blog is Viva la Vida and I read her “Our Story” and it really reminded me of how truly blessed I really am. This woman and her husband, after being told it was medically impossible, became pregnant. There were complications and she had such a raging case of Hyperemesis Gravidarium that she had to be intravenously fed daily. She couldn’t even keep water down. Because of the condition, the doctor had her get weekly ultrasounds to check on the baby’s well being. As messed up as all this was, she got to see her precious baby grow in utero.Her and her husband were so excited to meet this baby.They had waited so long for their miracle and had held off on knowing the sex. Before her week 24 appointment, they decided to throw caution to the wind and find out the sex of the baby. The night before her appointment, she started feeling extremely sick and constipated. By the following day, their lives had changed forever. (Please go to her blog if you want the entire story. It is not my story to tell  and I can not do it the justice it deserves.) The baby they had watched grow for 24 weeks and had grown to love so much passed away, without warning and without a chance to say goodbye…or even a brief hello.
Her story touched my heart and made me realize how grateful I am that my babies are with me. That I can touch them, hold them, kiss them, cuddle them, see their faces every morning and watch them sleep. I can watch them grow and get to know them with each passing day. It made me realize how lucky I am that they are here with me to aggravate and annoy me, at times, because being made crazy by them beats being sane without them…any day of the week. She is a brave woman to share her story. I was moved to tears when I read her story. I hope one day she will get to hold her baby boy in her arms again, in heaven.
I get so caught up in the day to day craziness that is my life that sometimes I forget that “THIS” is everything I ever wanted! My girls are absolutely amazing. They blow my mind with their wit and beauty on a daily basis. Their souls and their intelligence beat that of any grown person,I’ve ever known.  I know women who have lost children before they were born, were still born at full term, who have lost infants, young children, and teenagers and it never seems to get easier or less painful when a Mother loses her children. The void that is left by the loss of a child is one I hope to NEVER know. So I am going to cherish my girls with all I have got for as long as I can,and if you hear me complain again from time to time….forgive me! I’m only human!